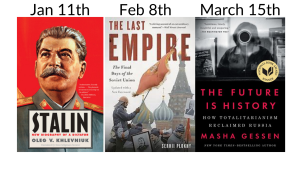 Steve Houser and Steve Rome, former history teachers, will lead a three-part series focused on Russia in the 20th century. We will have copies of these books at the library for you to borrow. This group meets in person in the library, and there is no registration. Everyone is welcome.

January 11th – Stalin: New Biography of a Dictator by Oleg Khlevniuk – THIS SESSION WILL START AT 7:00

February 8th – The Last Empire: The Final Days of the Soviet Empire by Serhii Plokhy

March 15th – The Future is History: How Totalitarianism Reclaimed Russia by Masha Gessen.