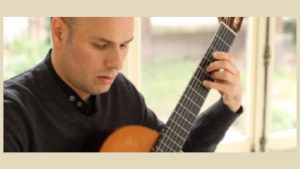 Register Here Carlos Pavan is a Brooklyn-based, Argentinian-born, composer/guitarist. He came to the United States to study in 2000. He has performed in major United States venues including  Lincoln Center, New England Conservatory, New York City Center, Brooklyn Borough Hall, Merkin Hall, Philadelphia Museum, and NJ Tango Festival as well as all over the world. His music is often described as a “mixture of classical, folk and jazz…based on Argentine folk forms…played with great virtuosity and startling intellect.” In addition to performing, Pavan offers private lessons and is an instructor at the Noel Pointer Foundation. He is also the composer, guitarist, and artistic director of the Park Slope Chamber Players.

One of the few benefits of this COVID period is that we are able to offer programs such as this one. We can feature performers and presenters from far afield. Pavan is one of these.