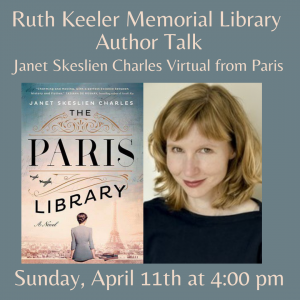 This best-selling novel by Janet Charles explores themes of love, loss, and courage in Paris during the Nazi occupation. Odile and other librarians at the American Library in Paris help the resistance and surreptitiously deliver books to soldiers and Jews and manage to keep the library open. The story unfolds through the efforts of a lonely teenager in Montana in the 1980s.
Janet Charles will be joining the Zoom program from Paris.